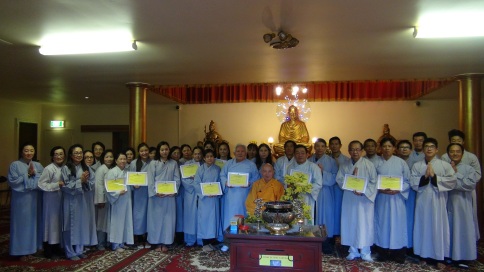 Upeksa Meditation Village (Thien Tu Hy Xa) organises the ceremony for Going for Refuge and Taking of Precepts twice each year, one on Buddha Birthday Celebration (usually in May) and another on Ullambana (usually in August).

Below are extracts from Buddhanet which provide more information on Going for Refuge and Taking of 5 Precepts.

Reasons for Taking Refuge
If people observe the world around them carefully, they are bound to notice the pain, suffering and frustrations experienced by sentient beings. A Buddhist will look for a way to end such distressing conditions in life just as a traveller caught in a storm will seek shelter. If the traveller is able to find shelter inside a building that is strong and safe, he will call out to others who are still struggling in the storm outdoors to join him in this safe refuge. Similarly, a person chooses to become a Buddhist when he understands who the Buddha is, and how the Buddha, Dharma and Sangha can provide him the way to end suffering. Out of compassion, he will also encourage others to take the same refuge.

The Buddha, Dharma and Sangha are called the Triple Gem because they represent qualities which are excellent and precious like a gem. Once a person recognises these unique qualities after careful consideration and is confident that the Triple Gem can help lead him towards happiness and Enlightenment, he takes refuge. It is, therefore, not out of mere faith, but with an open-minded attitude and enquiring spirit that he begins to practise the Buddha’s Teaching. In a way, he resembles the scientist who decides to carry out a research project once he is confident that it will bring positive results.

The Buddha
The word Buddha means the “Fully Enlightened One” or “Awakened One”. It is the title given to those who have attained supreme and perfect Enlightenment. Buddhists acknowledge the Buddha as the embodiment of the highest morality, deepest concentration and perfect wisdom. His followers also know the Buddha as the “Perfected One” because He has wiped out desire, ill will and ignorance, and has overcome all unwholesome actions. He has put an end to suffering and is no longer bound to the cycle of birth and death.

The Buddha is the Fully Enlightened One because He has realised the Truth and sees things as they really are. He knows through his perfect wisdom, what is good and what is not good for all beings. Out of great compassion, He shows people the path leading to the end of suffering.

The Buddha’s exemplary conduct, perfect wisdom and great compassion make Him an excellent teacher. By His use of skilful means, He is able to reach out to all His followers so that they can understand His Teaching.

The Dharma
The Buddha taught the Dharma solely out of compassion for sentient beings who suffer in the cycle of birth and death. The Dharma is therefore taught without any selfish motives. It is well-taught and completely good. It is by nature pure and bright like a light that destroys the darkness of ignorance. When the Dharma is studied and practised, it brings many benefits now and in the future.

The Dharma is the Teaching about the nature of life. This Teaching of the Buddha is contained in the three collections of scriptures called the Tripitaka or the “Three Baskets”. These consist of the discourses (Sutra Pitaka) said to have been taught by the Buddha, the rules governing the discipline of the monastic community (Vinaya Pitaka) and the philosophy and psychology of Buddhism (Abhidharma Pitaka).

A Buddhist gets to know about the Dharma by reading the scriptures. He also learns from the writings and explanations of qualified teachers of Buddhism. Once he has familiarised himself with the Dharma through reading and listening, he has to realise its truth for himself by putting it into practice. This means purifying his conduct and cultivating Mental Development until the Teaching becomes part of his own experience.

The Sangha
The Sangha that a Buddhist takes refuge in is the community of Noble Ones who have led exemplary lives and attained extraordinary insight into the true nature of things. Their lives and achievements show others that it is possible to progress on the path to Enlightenment.

However, the Sangha also generally refers to the fourfold community of monks, nuns, men and women lay followers. Monks and nuns are respected for their good conduct and for their experience in meditation. They are also respected for their diligence, mindfulness and calmness. Wise and learned, they are able teachers of the Dharma. They can also be like trusted friends inspiring the lay followers along the path of Good Conduct.

The lay followers accept the Four Noble Truths (http://www.buddhanet.net/e-learning/buddhism/bs-s02.htm) and the other teachings of the Buddha and seek happiness and Enlightenment as their common goal in life. They also uphold common moral values such as avoiding injury to others in any way. Thus a Buddhist can look to other members of the lay community for help and advice in times of need.

Analogy of a Journey
To understand better the idea of taking refuge, one might take the example of a traveller who wants to visit a distant city where he has never been to before. He will surely need a guide to lead him towards his destination. He will need a path to follow. He may also wish to have travelling companions on the journey. A Buddhist working towards attaining happiness and Enlightenment is like the traveller trying to reach that distant city. The Buddha is his “guide”, the Dharma his “path” and the Sangha are his travelling companions”.

A Buddhist takes refuge in the Buddha as his guide because he believes that the Buddha, having attained Enlightenment Himself, is able to guide him towards that goal. The Dharma that he takes as his refuge is like a path that has been well laid out. Such a path may include signposts to show directions, bridges for crossing rivers and steps for climbing mountains. Similarly, the Dharma includes the rules of Good Conduct to help him avoid unwholesome actions and the techniques of Mental Development to help him overcome distractions. It also teaches him how to overcome ignorance and gain Enlightenment.

Taking refuge in the Sangha is like having good travelling companions who keep a traveller company, care for him when he is sick and encourage him along when he is tired. The members of the Sangha, like ideal travelling companions, help the lay follower to purify his unwholesome ideas and correct his behaviour through sound advice and instruction, and encourage him to continue his journey to Enlightenment.

5 Precepts
Essentially, according to Buddhist teachings, the ethical and moral principles are governed by examining whether a certain action, whether connected to body or speech is likely to be harmful to one’s self or to others and thereby avoiding any actions which are likely to be harmful. In Buddhism, there is much talk of a skilled mind. A mind that is skilful avoids actions that are likely to cause suffering or remorse.

Moral conduct for Buddhists differs according to whether it applies to the laity or to the Sangha or clergy. A lay Buddhist should cultivate good conduct by training in what are known as the “Five Precepts”. These are not like, say, the ten commandments, which, if broken, entail punishment by God. The five precepts are training rules, which, if one were to break any of them, one should be aware of the breech and examine how such a breech may be avoided in the future. The resultant of an action (often referred to as Karma) depends on the intention more than the action itself. It entails less feelings of guilt than its Judeo-Christian counterpart. Buddhism places a great emphasis on ‘mind’ and it is mental anguish such as remorse, anxiety, guilt etc. which is to be avoided in order to cultivate a calm and peaceful mind. The five precepts are:

1) To undertake the training to avoid taking the life of beings. This precept applies to all living beings not just humans. All beings have a right to their lives and that right should be respected.

2) To undertake the training to avoid taking things not given. This precept goes further than mere stealing. One should avoid taking anything unless one can be sure that is intended that it is for you.

3) To undertake the training to avoid sensual misconduct. This precept is often mistranslated or misinterpreted as relating only to sexual misconduct but it covers any overindulgence in any sensual pleasure such as gluttony as well as misconduct of a sexual nature.

4) To undertake the training to refrain from false speech. As well as avoiding lying and deceiving, this precept covers slander as well as speech which is not beneficial to the welfare of others.

5) To undertake the training to abstain from substances which cause intoxication and heedlessness. This precept is in a special category as it does not infer any intrinsic evil in, say, alcohol itself but indulgence in such a substance could be the cause of breaking the other four precepts.

For in-depth reading:
Going for Refuge & Taking the Precepts by Bhikkhu Bodhi (http://www.accesstoinsight.org/lib/authors/bodhi/wheel282.html)

Photo Albums for Events in 2019

Photo Albums for Events in 2018 and earlier

Our English-speaking group member Brook participating at the Interfaith Blessing Ceremony at Salisbury on 30 November 2019.

Photos from the Interfaith Blessing Ceremony